This week we continue with the second and final part of John of Patmos' Mythic Babylon campaign report. See the previous post for part 1 and a link to the music of Aphrodite's Child which you should be listening to as you read this.

While the player-characters were busy in Babylon, something else was going on a few hundred double-miles to the south – a great ripple in the Lower Sea. Silanum's answer to the cries of the people was amplified by Ea and reached even to the Kulullu and Kuliltu people (18) who live beneath the waves of the Lower Sea.

The sun was black
the moon was red
the stars were falling
the earth has trembling
And then a crowd impossible to number
Dressed in white
carrying palms
shouted amid
the hotless sun
the lightless moon
the windless earth
the colourless sky ...

They heard and heeded the call, but were greatly disturbed by a disturbance from the depths. Something very old was approaching from the open ocean.
They cried out it's name in warning to the people of Babylon: “An-Dammu! An-Dammu!” (19) The ecstatic prophets of Babylon heard the name and took up the cry in the streets of the city, but few could heed or understand them. After crying their warning, the Mer-people fled into the the shelter of the Abzu (20) where Ea offered them protection.

17. In the opera, the band called this track Aegian Sea in order to make the work more accessible to their audience.

19. The name An-Dammu means 'Spouse of Heaven' and can be arrived at by rolling the numbers 6-1-6 on the Babylonian name generator, or by rolling 6-6-6 if one accepts that An-Dammu's city of origin is heaven itself. John of Patmos invented her for the campaign, and saw her as a beast birthed by Temtu (the Sumerian primordial sea, later called Tiamat), who birthed many monsters, demons, and hybrids. An-Dammu is betrothed to Anu, the god of Heaven. In the Middle Babylonian Creation Myth, Marduk would defeat Tiamat to become king of the gods. But in this campaign its her offspring that's defeated.

20. The Abzu is the subterranean water, the domain of Ea.

We return again to the action in Babylon. After the half-hour of silence that followed the opening of the seventh seal (see Part 1), the statues of the seven great gods animated. They walked from their inner sanctuaries to the gates of their temples, seeming to grow in size as they did so. Each carried a bowl in their left hand and a trumpet in their right. They then raised their trumpets to their mouths and, as the trumpets rang out across the land, overturned their bowls - and the punishment of the gods was poured out.

The god Adad overturned the first bowl, and a mixture of hail, fire, and blood fell to the earth, killing a third of all trees and grasses.

The god An overturned the second bowl and a mountain fell from the sky into the ocean, killing a third of all marine life.

The goddess Ištar overturned the third bowl, and a star fell from heaven and poisoned a third of all rivers and springs.

The god Šamaš overturned the fourth bowl, and a third of the sun, moon, and stars disappeared, creating total darkness for a third of the day and the night.

The god Sin overturned the fifth bowl, and another star fell from the sky and created a great rift in the ground, open to the underworld. Out of this poured a cloud of smoke, and from the smoke came locusts who were "given power like that of scorpions of the earth", and who were commanded not to harm anyone given the "seal of God" on their foreheads. These "locusts" had a human appearance (faces and hair) but with lion's teeth, and wearing breastplates of meteoric iron (21). The sound of their wings resembled "the thundering of many horses and chariots rushing into battle." They flocked to the shore of the Lower Sea, there to await An-Dammu, who was soon to emerge from the sea.

The god Ea overturned the sixth bowl, and the four winds blew the remaining stars out of the sky. When they fall to earth, they were seen to be two hundred million charioteers with flaming wheels and smoke pouring out behind them.

The god Enlil overturned the seventh bowl, and a vision of the Tablet of Destinies was revealed to all – Enlil was shocked to see that the tablet was inside the temple of Marduk, rather than inside his own temple, and that the priestess Silanum was writing furiously within. He unleashed thunder, lighting, and hail to the earth, in order to sweep aside all those remaining in the city, including Silanum – but those marked with the triangle on their foreheads were protected by Ea. So Enlil called forth the beast!

21. These locust men were invented by John for the campaign – they aren't mentioned in Babylonian myth, though they definitely fit the idiom For stats, he used modified Pazuzu (a demon) from the book.


9. THE WAKENING OF THE BEAST


This instrumental track in the album turns our attention back to the Lower Sea for a moment, where at last the beast, An-Dammu, is emerging – a monstrous seven headed serpent with poisonous blood!


Back on the ziggurat of Marduk, the nameless Gala Priestess character sang out a lamentation for those who were lost, by which to give hope to those who remained.


Enlil had seemingly been foiled, because not everyone was dead! He had once again been tricked by Ea and now saw the writing on the Tablet of Destinies. He instructed his step mother, An-Dammu, to march northward at the head of her locust army to put an end to people forever.

But though things looked grim for the followers of Marduk, all was not lost. The stars that had descended to earth as flaming chariots when Ea overturned the fifth bowl were now revealed to be pulled by Apsasus and Aladlammus (22), They are driven by Lahmu (23) and their regiments commanded by the Apkallu (24). Marduk then stepped from his temple and called upon his followers to jump on chariots and join the fight! And so the PCs did!

22. Apsasu and Aladlammu are the Old Babylonian period names for the iconic winged, human-headed bulls that guard the homes of the gods. They are female and male respectively – it's not known if there was more than one of each, but in Mythic Babylon we generally assume so.

23. Lahmu are 'hairy-hero-men' hybrids, created by and servants to Ea.

24. The Apkallu are the Seven Sages, originally sent to earth to instruct humans in the arts of the ME (the trappings of civilization.) By the time of Mythic Babylon, they no longer seem to walk the earth, but it is assumed they will return at times of need.

12. THE BATTLE OF THE LOCUSTS

These three instrumental tracks describe how the army of Marduk and the army of An-Dammu met for a climactic battle on the fields outside Enlil's home city of Nibbur. The player characters, drawn by Ea's fantastical chariots, helped fight the onslaught of locust men.


Fighting the locusts seemed futile, and the player-characters soon realized that the path to victory lay in helping Marduk kill An-Dammu, so they directed their chariots to help find the beast.


At last, the shape of the giant seven-headed serpent was spotted through the smoke, and Marduk called out a challenge:

Lyrics
Come out, cursed serpent,
because if you don't out yourself,
I will out you! (25)

The two gods squared off, and Marduk drove An-Dammu into the marshes while the players fought off her Umu (26) demon lieutenants. Driven back, An-Dammu disappeared into the bog. The locust army was now defeated, but there is also much injury on the side of humanity, so a temporary withdrawal was called.

The great gods rang out seven trumpets again, this time to mark the victory of Marduk and hail him as the new king. Enlil accepted his defeat and agreed to step down as king of the gods, though he would keep his sky domain. The army of Marduk re-grouped at the foot of the Duranki (Navel of Heaven and Earth), the great ziggurat of Enlil in Nibbur.

Marduk now sat on the throne of Enlil in Nibbur and his high priestess, Silanum appeared once gain to recite an exaltation to the assembled followers of Marduk:

19. THE WEDDING OF THE LAMB

Following her song, Silanum (“The Lamb”) was symbolically married to Marduk (The Shepherd), and the god and his people were formally united.

One final task was given to the players – to enter the swamp and capture the beast, and bring her back to Nibbur to face the punishment of the gods. They headed to the marsh at the head of a posse of Ea's inhuman servants and followed her to her lair. She was much diminished by this time, but still dangerous (27). Because of her Melammu (28), the players needed to make willpower tests just to approach her.

27. For this encounter, John used the statistics for Mušmahhu, the great seven-headed serpent.
28. Melammu ('Frightening Splendour') is the aura that surrounds gods and certain other beings.

After fighting for a time, with both sides suffering significant injuries, The Beast opened a dialogue with the player-characters, attempting to get them to her side. They allowed her to speak while they also caught their breath. She explained that she could not be killed; that she was primordial. She existed before the gods, and would come again after them. Her role on the planet was to herald change and create new orders, not to be enslaved.

Lyrics:
I was
I am
I am to come

The players tested their purity to decide how to react to the beast, and decided to let her go. It was the Gods and Samsu-Ditana who brought all this about, afterall. The beast needed to exist in order to redress the imbalance. So they let her go, and returned to Nibbur to meet their own punishment for defying the gods.

The characters returned to Nibbur to be tried by the gods, and the stated their case before the great council of Marduk. Afterward, Silanum came to their cell to tell them they had been pardoned. She made a final speech, and sang a song of praise to the characters who helped save the world and usher in the new order.
With this, the campaign came to a close. In his de-briefing afterwards, John of Patmos revealed that the Kassite character's offspring with Silanum would form the next ruling human dynasty of Babylon.

23. ALL THE SEATS WERE OCCUPIED

The campaign ended, but the rock opera concludes with two remaining tracks. This one summarizes the campaign, hitting the highlights and commending the GM on not killing a single player-character.

And finally, a goodbye from the group as they planned to split up for the summer at the end of term. In fact, they were never able to get everyone together for a game again. Some have argued that every campaign can only exist once, and the Apocalypse of John of Patmos can never be re-created. Can't it? Do it! 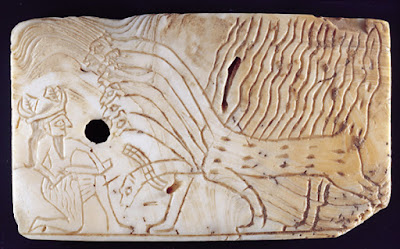 What Is the Many Coloured House?

About The Many Coloured House

Apocryphal Chris
I'm an history enthusiast with a particular interest in the Bronze Age Near East and Dark Ages Britain. I'm also the lead author of Mythic Babylon, a setting for the Mythras Role Playing Game that lets you play characters in 1764 BC Babylon.