How Admu the Sorceress acquired the Spear of Nergal

Last year we ran a few different one-shot scenarios as part of a larger play-testing process for Mythic Babylon. These one-shots were designed to test particular aspects of the system, as well as to generally make sure the game was fun to play. One of those playtests was a combat encounter that pitted one group of player-characters against another. This is how it played out.

One year, in the drought of summer, a group of priests in the service of the temple of the plague god, Nergal, traveled up the Tigris River from their home city of Mashkan-Shapir. Their purpose was to attend a festival in honour of the Divine Twins in the vicinity of the town of Mardaman. They brought with them the Spear of Nergal, a divine weapon, which was to be used as part of the ceremony. Before they reached Mardaman, the weapon-bearer started behaving erratically, then ran off into the edinnu (steppe) - where he was snatched by a Griffin and carried away with the spear still in hand.

At the head of this group was a Baru (diviner) military commander, who was able to perform a quick divination to determine where the weapon could be found. Armed with this information, they set off in pursuit.

Meanwhile, a Turukkean sorceress named Admu was camping nearby with her posse when they saw the Griffin fly through the sky with a human in his claws. Obviously an omen, the sorceress perceived this to mean that 'she would make acquisitions'. So she, too, set off in chase.

The scenario begins when the group of priests crests one bank of the river (Point P), and the sorceress' group crests another bank (Point S), and for the first time they have the potential for conflict.

Below them lies the river valley. The body of the dead priest – with spear still in hand – lies on an eyot in the river. The griffin splashes in the water nearby, jumping up and down while trying to catch fish. It seems to be having a hard time of it. A muddy oxbow lies nearby, surrounded by reeds and populated by a flock of long-legged waterfowl.

The priest group consists of:

Ibbi-Adad, a Baru, or professional diviner, who also happens to be a military commander in the army of Larsa.

Turum-Nakti, an Archer and military escort.


The group of Admu the Sorceress consists of: 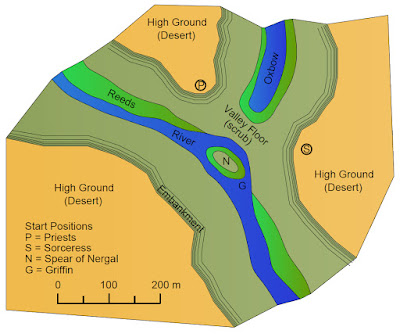 How the session played out:

When the two groups arrived at the top of their respective banks, they paused to assess one another. Neither knew who the other people were.

Admu the Sorceress and her group acted first by descending the embankment and approaching the shore opposite the island. They noticed that there were Lion-fish swimming in the water. No wonder the Griffin was having a hard time catching its meal! One of the two tribesmen shot at the griffin and hit it, a mighty fine shot leaving it sorely wounded in its hind-quarters.

The griffin, angered by the arrow, flew into the air and began dive-bombing the two Turukkean archers. Not realizing their danger as it flew into the sky, they wasted an action shooting at the lion fish, but when the griffin screamed out of the air in a dive-bomb they gave it their full attention.

Meanwhile, the group of priests also started to approach, still uncertain as to whether the unknown people were friend or foe. They tried to make peaceful overtures, but the sorceress turned toward them and cast “Hateful Augury” on them. This caused a large flock of marsh birds from a nearby oxbow lake to fly toward them and attack! In a panic, most of that group scattered and fled in various directions - except for Ea-Nasir the exorcist, who cast an incantation of his own: “To Tie a Fly” (which repels vermin and bad omens - we decided it applied here). He cast the spell successfully, but failed to overcome the Sorceress' spell-casting roll, so he was attacked mercilessly by the birds. He tried again on his second action and this time was successful.

The snake-charmer from the sorcery group also tried to get into the spell-casting action by reciting an “Incantation of Nirah” and directed his snake toward the exorcist. His snake was never able to approach, though, because the “To Tie a Fly” incantation repelled it, too.

Once his bird spell was broken, the sorceress cast another spell, “Voice of Kinshaba,” on the exorcist, causing him to be very angry with his own ally, Turum-Nakti the archer. The exorcists chased after the archer, berating him. They ran around until the griffin became the obviously bigger threat – at which time the archer shot an arrow at it.

The two Turukkean tribesmen were meanwhile not faring well against the griffin. After a couple of bad rolls, and no luck points or fortune points to use, they didn't really have a chance They were killed one after the other in two successive rounds, arms torn off by the claws of the griffin. Seeing the trouble, and having scared off the party of priests for now, Admu the sorceress cast “Crippling Pain” on the griffin as it flew above. The spell was successful - but unfortunately hit the left front leg of the creature rather than a wing, chest, head, or abdomen - so it was able to keep fighting from the air. With his magic points now all used up, the sorcerer hid behind a bush, and the snake-charmer slunk down the river bank. The griffin went the opposite way toward priests because their archer had just shot an arrow at it.

Now the priest group, recovered from their fear and sorcerous effects, fought the griffin. The exaltation priest sang an “Exaltation to Erra” liturgical song to boost the entire team by 13%. The baru priest similarly cast buff spells, mostly on the archer. The exorcist tried to draw the attention of the griffin away from the archer and became its next victim. His arm was pulled off in the thing's beak and he collapsed and bled out in the mud. The other three fought on, taking turns drawing the beast attention and diving out of the way. This fight lasted several rounds.

With the griffin occupied elsewhere, the snake charmer saw an opportunity. He drew his second pet snake out of his basket and sacrificed it as a decoy, throwing it into the water as bait for the Lion-fish. Their attention drawn away, he waded across to the eyot and reached the dead body which still grasped the spear. When he tried to pry the dead hand off the spear, though, he was attacked by the passion spirit that had been possessing the priest - and thus found himself locked in spirit combat for the rest of the session.

The sorcerer, now emboldened by the actions of the snake-charmer, also came over to the island. She threw the body of one of the Turukkeans into the river as a decoy and safely crossed over. She reached the spear and grabbed it, ignoring the snake-charmer who was still locked in spirit combat.

And that's how Admu the Sorceress came to acquire the Spear of Nergal.
at January 19, 2020

What Is the Many Coloured House?

About The Many Coloured House

Apocryphal Chris
I'm an history enthusiast with a particular interest in the Bronze Age Near East and Dark Ages Britain. I'm also the lead author of Mythic Babylon, a setting for the Mythras Role Playing Game that lets you play characters in 1764 BC Babylon.